HISTORY OF THE CHAPEL 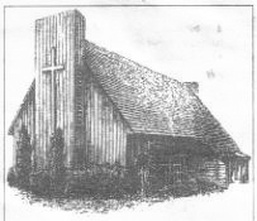 In the spring of 1967, the newly formed United Holiness Church of North America explored plans to start a bible college to train young people called to the ministry and others wishing to receive a Christian education. God had placed this desire in Rev. E.D. Coxon’s heart some time previously. At the 1967 summer camp meeting in Sunfield, Michigan, he made an announcement, “We are going to start a Christian college to train our young people. And these young people will go out and bless the world.” This proclamation became the passion of many others.

When classes began in September 1967 at Wesleyan Bible Institute, a powerful spirit of hope and expectation was felt among the students, faculty and staff. This was strong enough to see them through many struggles in the years that followed.  Their lack of knowledge, experience, money, and resources was great, but time after time God came through and did the impossible. There was a sense of God’s promise that He would do something great here, to be a part of building His kingdom.

The motto was “Sacrifice and Fun.”  There was very little money so students and faculty, under the leadership of Rev. DeWayne Coxon, began constructing the buildings on Monday work bees, summer breaks, and evenings.

In 1971 students tore down twelve barns and built the Chapel.  Services began in January 1972 with donations of an organ, a piano, and pews. Everything was built with an abundance of sacrifice and fun.

Many will remember early morning prayer meetings, chapel services during the school day, prayer before classes, mid-week vespers, Sunday services, Spring choir tours, impromptu bible studies and songs around the piano.  Numerous weddings and several  funerals, baby dedications, special speakers, and singers, concerts and graduations took place in the beautiful sanctuary. Many, many times the Holy Spirit’s presence was very near.  With it all was a sense of doing something great for the kingdom of God, along with a sense of His promise that He would bless it.

In December 1972, Wesleyan Bible Institute became Jordan College and in 1977, Jordan College became independent of the United Holiness Church. Then, in December 1995, after twenty-eight years, Jordan College closed.  Still the congregation continued to worship in the Chapel. There were several pastors, yet most of the time, it was Rev. DeWayne Coxon.

Reverend Coxon retired in December 2004, and in January 2005, the Old Chapel, now also known as the Cedar Springs Christian Church, was incorporated. The small congregation that remains continues to worship and work with a powerful spirit of hope and expectation and the comfort of experiencing God’s miraculous provision for today. For several years they have continued on with ‘sacrifice and fun’ in mind, and on January 1, 2010, retired Rev. DeWayne Coxon gladly officiated the service for Ryan Black to become the new pastor.

Pastor Black has a love for the Word and a passion for people to understand God’s whole plan in it. He has studied extensively the Jewish roots of the Christian faith and feels a concern for people to understand the times we live in and be prepared for Christ’s return. His heart and mind embody all the hope and expectation of the Chapel’s history and God’s promise to the Chapel for the future.

In January 2012, the Chapel building became forty years old. There is still a powerful spirit of hope and expectation of God’s promise that He will complete what He started and that He will do great things here for His kingdom.  All of you who were a part are welcome to come and have a share in it. And all of you who never knew one moment of any of it are welcome to come and share in all that God will do.